Select one of the following links to be guided to specific chapters:

Being a descendant of the FORECE model (Kienast 1987), in FORCLIM establishment, growth, competition and mortality of trees are simulated on small areas (‘patches’), normally with a size of 1/12 ha (ca. 833 m2). The approach of FORCLIM is to use only a minimum of ecological assumptions to capture the influence of climate and ecological processes on long-term forest dynamics (Bugmann 1996; Bugmann 1999). As a basic rule, it is assumed that there is no interaction between patches, implying that forest succession on a patch is independent of its neighborhood (Bugmann 2001). The simulation results from many patches (typically 200) are averaged to obtain the general succession pattern at the stand scale (Bugmann and Solomon 2000).

FORCLIM is currently parameterized for ca. 180 tree species dominant of temperate forests worldwide. The model has been tested comprehensively for the representation of natural forest dynamics of temperate forests of the Northern Hemisphere, with an emphasis on European forests . For example,  FORCLIM results match time series data from growth-and-yield plots over 80-100 years remarkably well (Rasche et al. 2011), and it can also be used under scenarios of anthropogenic climate change (Didion, Kupferschmid Albisetti et al. 2011).

FORCLIM is undergoing continuous development in the Forest Ecology Group of ETH Zurich; new versions of the model are being produced in the context of a range of research projects (see Model History). 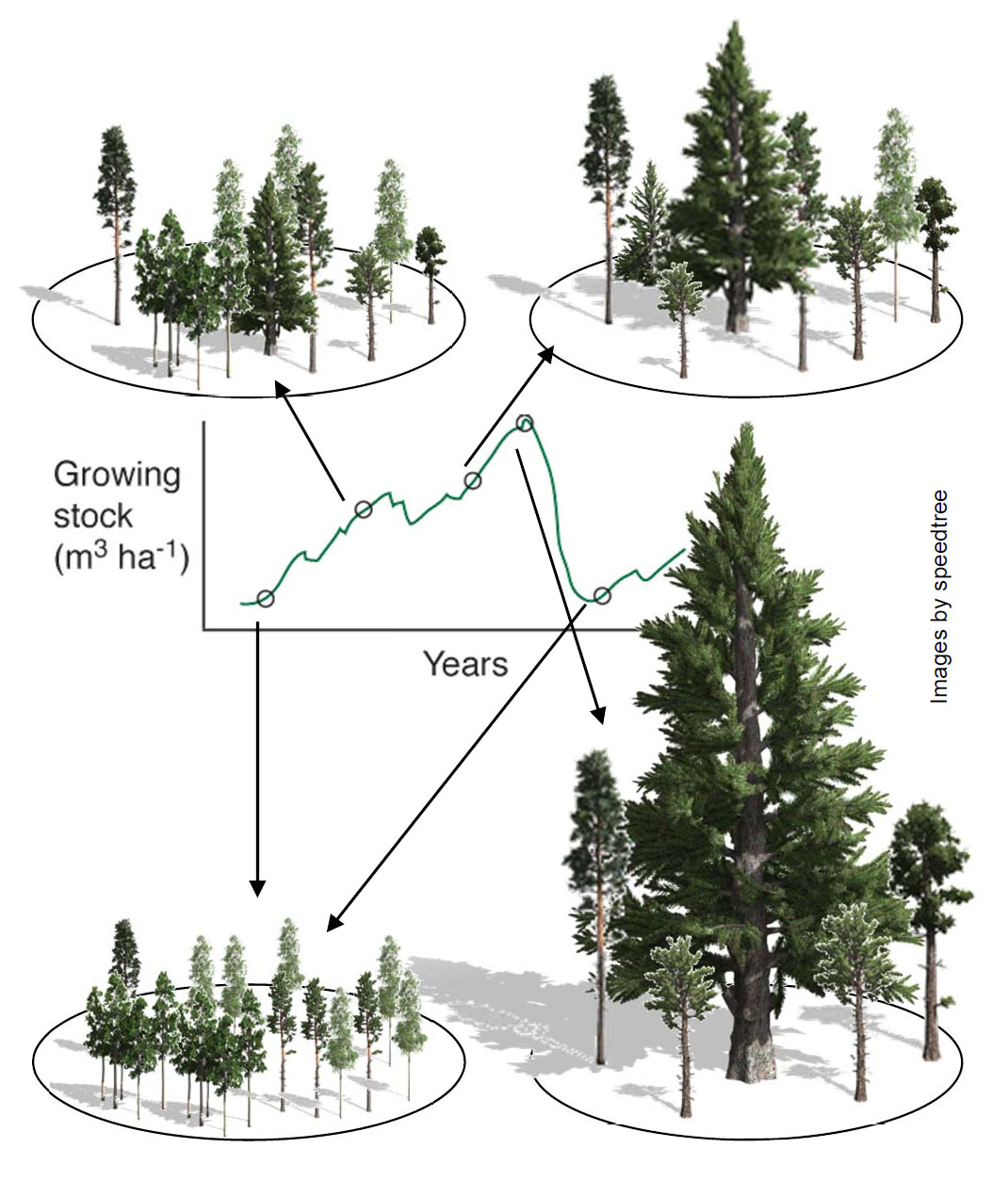 Structure of the model 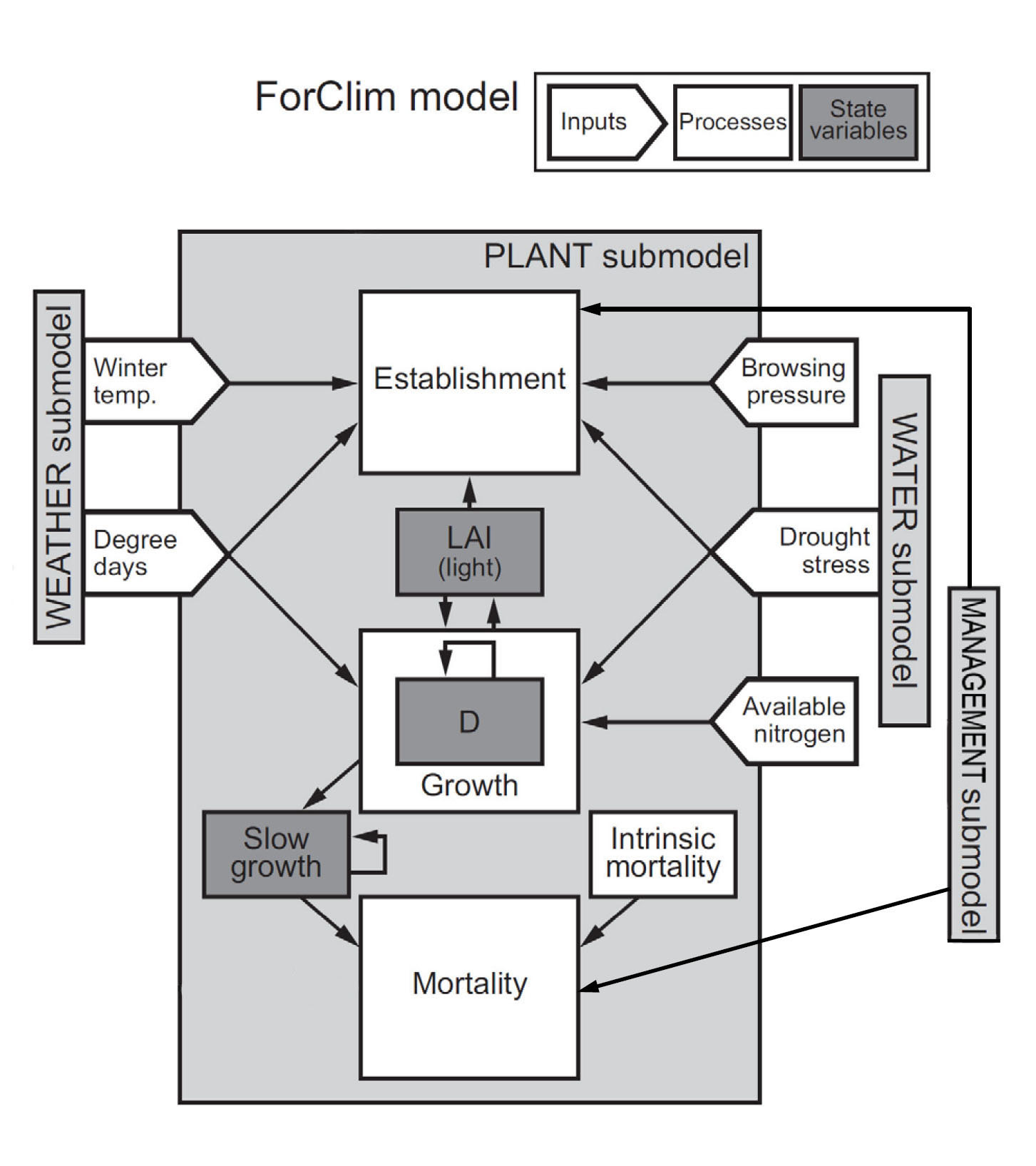 The structure of the ForClim model (modified from Rasche

The PLANT submodel simulates establishment, growth and mortality of tree individuals that, for technical reasons, are grouped in size cohorts. Tree establishment rates are determined from light availability at the forest floor, soil moisture, growing season temperature, minimum winter temperature and browsing pressure. The optimal radial stem growth rate of every tree is decreased based on the degree to which environmental
factors (growing season temperature, soil moisture, light availability, nitrogen availability) and crown size are at suboptimal levels. Tree
mortality is modeled as a combination of an age-related and a stress-induced component (Rasche, Fahse et al. 2012).

The WEATHER and WATER submodels provide the input data for the PLANT submodel. These two submodels calculate bioclimatic indices such as
minimum winter temperature, the annual sum of degree days and soil moisture based on long-term weather data and the site-specific soil water holding capacity. Values are determined from a probability distribution around the climate parameters separately for each patch.

The submodel MANAGEMENT allows simulations forest management strategies that are commonly used in Central Europe, such as clearcutting,
shelterwood, thinning, planting, among others. For a description of the management submodel, see the Supporting information in Rasche, Fahse et al. (2011).

A selection of the most significant publications concerning the application of ForClim:

1994    FORCLIM v.2.4
Development of the forest gap model FORCLIM, test of its realism compared to its predecessor model and behavior along climate gradients in Europe and eastern North America.
Main reference: Bugmann (1996) Ecology 77(7): 2055-2074.

2005    FORCLIM v.2.9.3
Replacementof the parabolic height-diameter relationship by an asymptotic equation, with an increase of the generality and realism of the model. Translation from original code in Modula-2 to C#.
Main reference: Risch, Heiri et al. (2005) Ecological Modelling 181(2–3): 161-172.

2007    FORCLIM v.2.9.4
First tests of the model against long-term data from Growth-And-Yield plots. Preliminary changes to the regeneration and mortality submodels to
improve their realism. Implementation of a light-dependent allometry between leaf area and DBH to account for the self-pruning in real stands.
Main reference: Wehrli, Weisberg et al. (2007) European Journal of Forest Research 126(1): 131-145.

Since version 2.9.1 of ForClim, the source code is maintained in C#, based on an earlier implementation of the model in Modula-2.

FORCLIM runs in the .NET framework on Windows PCs, and under Mono on Apple Macintosh and Linux operating systems.

FORCLIM is provided as an executable file together with a set of xml-files where all the basic settings of the simulation experiment and model parameters are managed.

FORCLIM can also be utilized via a dedicated graphical user interface, FORSIM (Figs. 2-3), which is a product of the Forest Ecology Group. Note that FORSIM is also being developed for the companion model LandClim. FORSIM allows for loading and editing setup/input files, changing settings parameters, running sequential simulations and displaying numerous results in charts and tables. 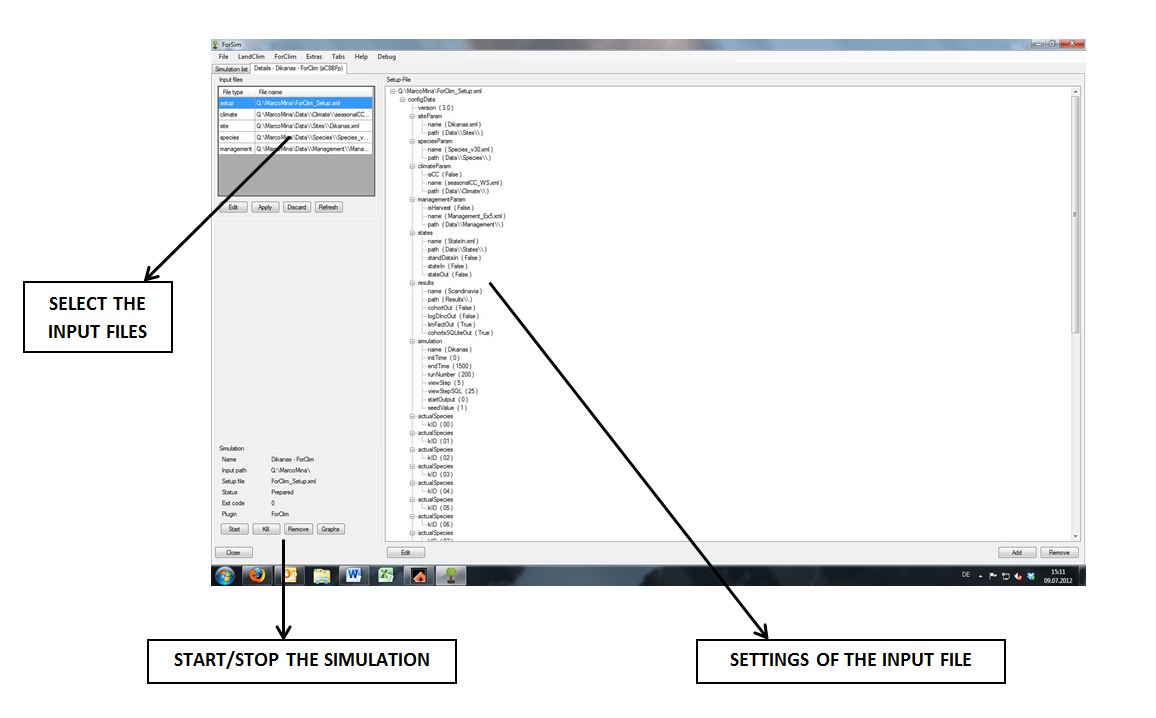 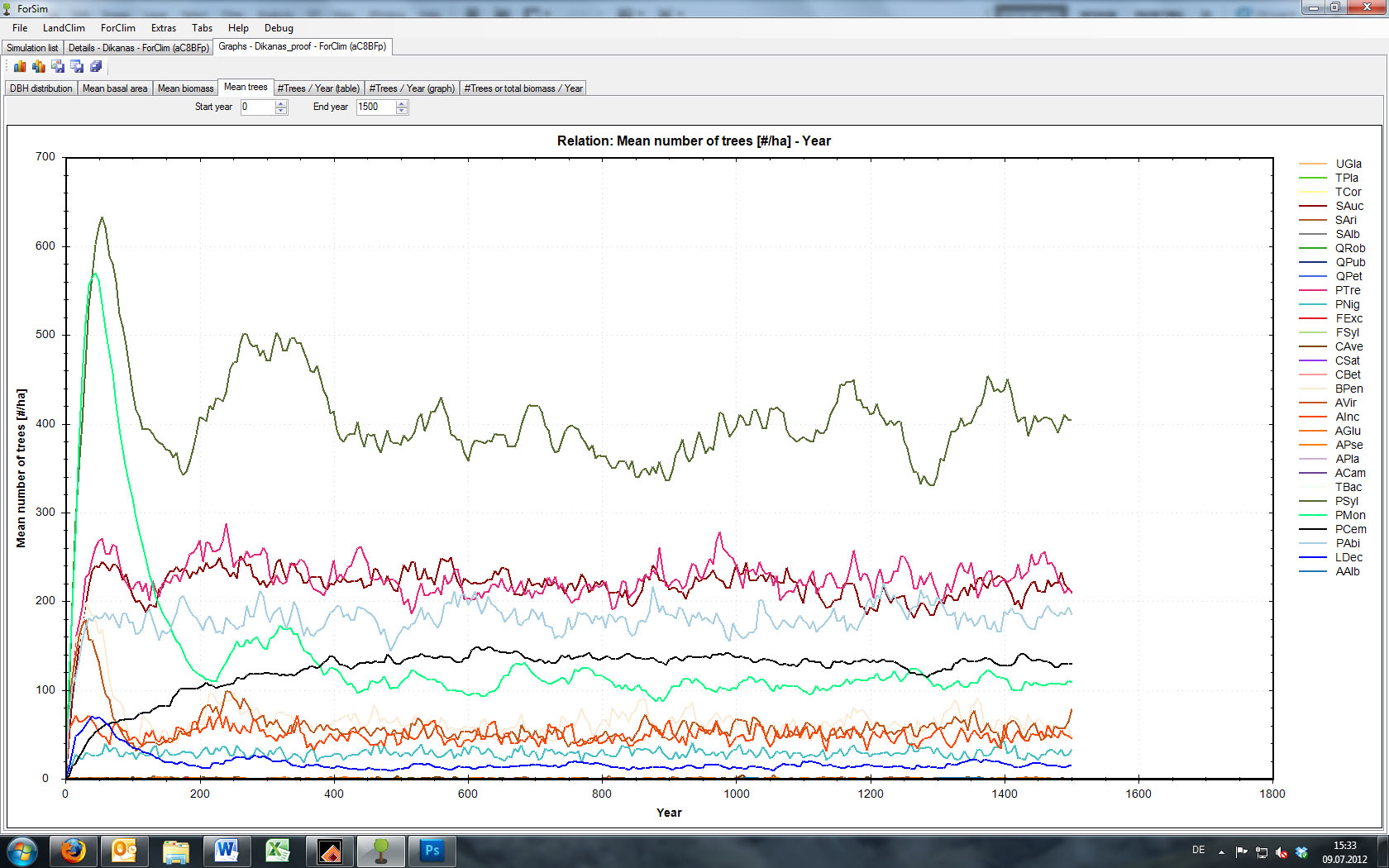 The use of FORCLIM with the graphical user interface (GUI) FORSIM.

As input data FORCLIM requires monthly averages and standard deviations of temperature and precipitation besides few site-specific parameters regarding the soil characteristics.

Your experience on this site will be improved by allowing cookies.