Select one of the following links to be guided to specific chapters:

LandClim is a stochastic process-based model designed to study spatially explicit forest dynamics at the landscape scale over long time periods with a fine spatial resolution. 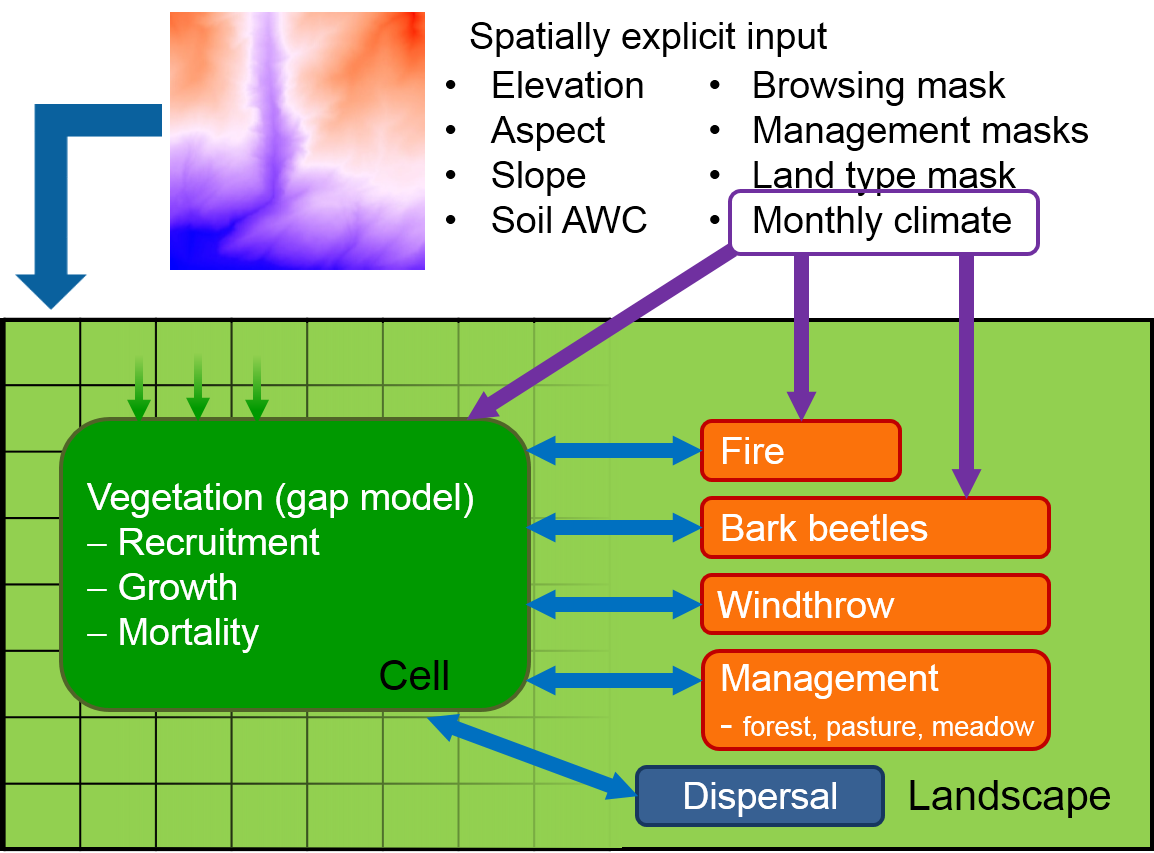 Overview of the model

Structure of the model

The design of LandClim reflects processes at two spatial scales: (1) the stand scale (with grid cells of 25m x 25 m) and (2) the landscape scale (large geographical areas up to several thousand hectares).

At the stand scale, the model simulates tree growth, recruitment and mortality within each grid cell, using species-specific life history parameters. The model uses a cohort approach; i.e., trees of the same age and species are simulated by one representative individual.

A selection of the most significant publications concerning the application of LandClim:

Integration of a simple tree succession sub-model in LANDIS, which incorporates quantitative descriptions of forest structure, and including sub-models to capture the influences of competition as well as climatic and edaphic parameters on tree population dynamics. The new model LandClim was tested for managed as well as unmanaged conditions in the Dischma valley (Switzerland) and accurately predicted the altitudinal distribution of vegetation properties as well as vegetation recovery following wind disturbance events.

The relative importance of climatic effects, wildfires and management for future forest landscape dynamics in the Swiss Alps 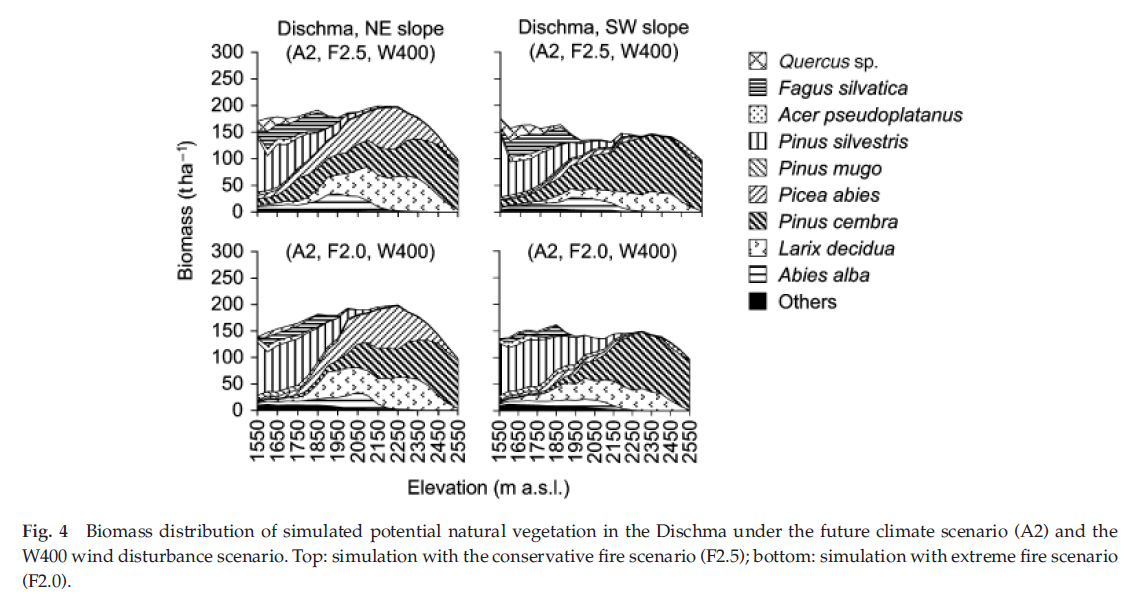 Did soil development limit spruce (Picea abies) expansion in the Central Alps during the Holocene? Testing a palaeobotanical hypothesis with a dynamic landscape model

Palaeobotanical studies have demonstrated that forests reacted highly sensitive to climate change during the Holocene. However, temperature alone cannot account for important changes in tree species abundance. We examined the impact of reduced moisture availability on forest dynamics using a combined dynamic modelling/palaeoecological approach at two high-elevational lakes in the Swiss Central Alps. Our simulation results suggest that Spruce expanded in the Central Alps only after soils developed sufficient water-holding capacity and precipitation neared its modern abundance. 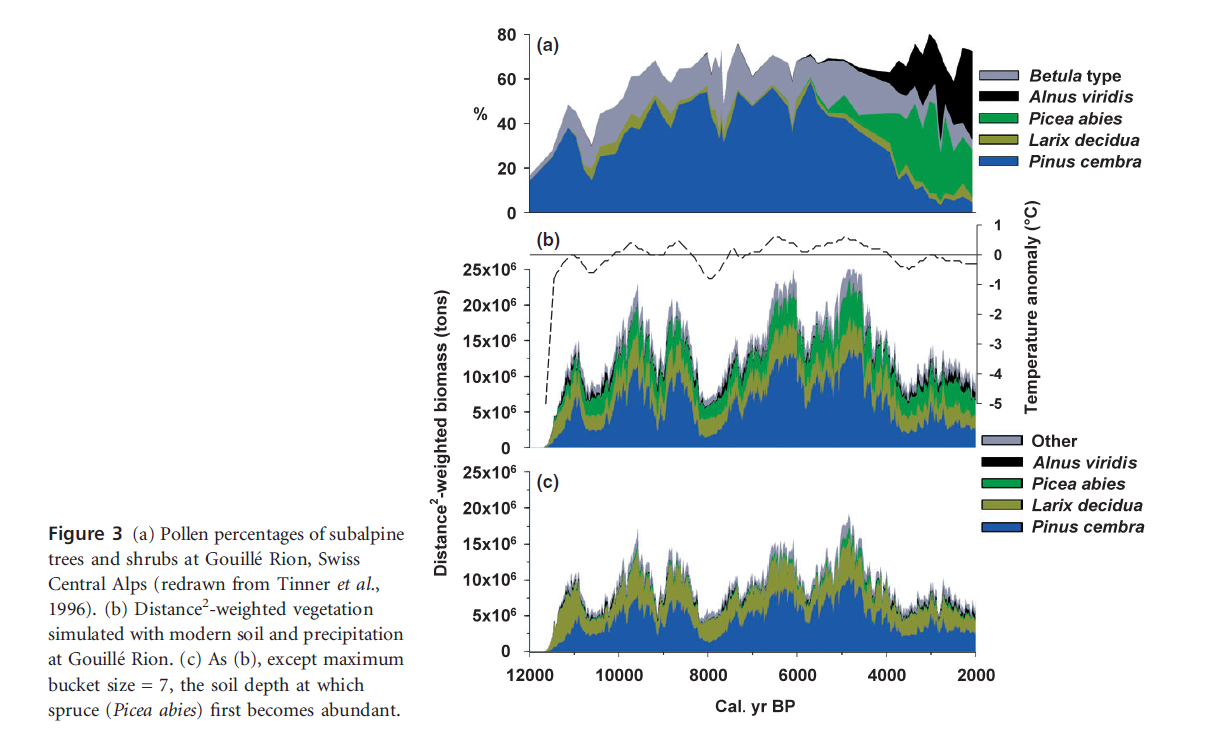 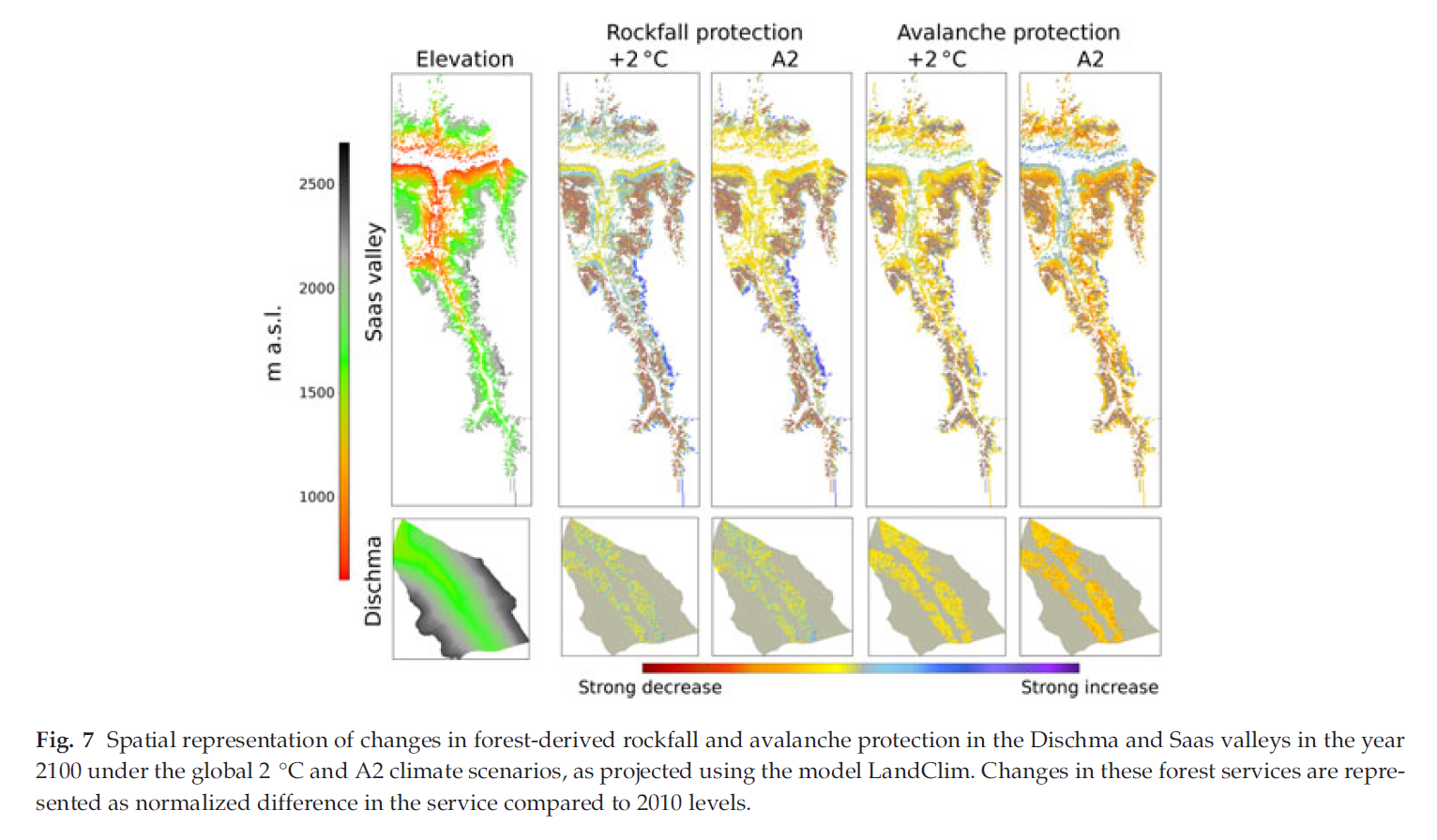 Bark beetles are a key forest disturbance agent worldwide, with their impact shaped by climate, forest susceptibility, and interactions with other disturbances such as windthrow and fire. We developed a spatially explicit model of European spruce bark beetle (Ips typographus) dynamics that incorporates beetle phenology and forest susceptibility and integrated it in LandClim. We used this model to examine the mechanisms and feedbacks that are driving short-term and long-term interactions among beetle disturbance, climate change, and windthrow, and how they may shift in the future. Our results suggest that, depending on initial environmental conditions, climate change may shift the importance of direct and indirect drivers of disturbances. These shifts may affect the sign and strength of cross-scale disturbance interactions and may impact the cost-benefit trade-off between beetle suppression and preventive management strategies. 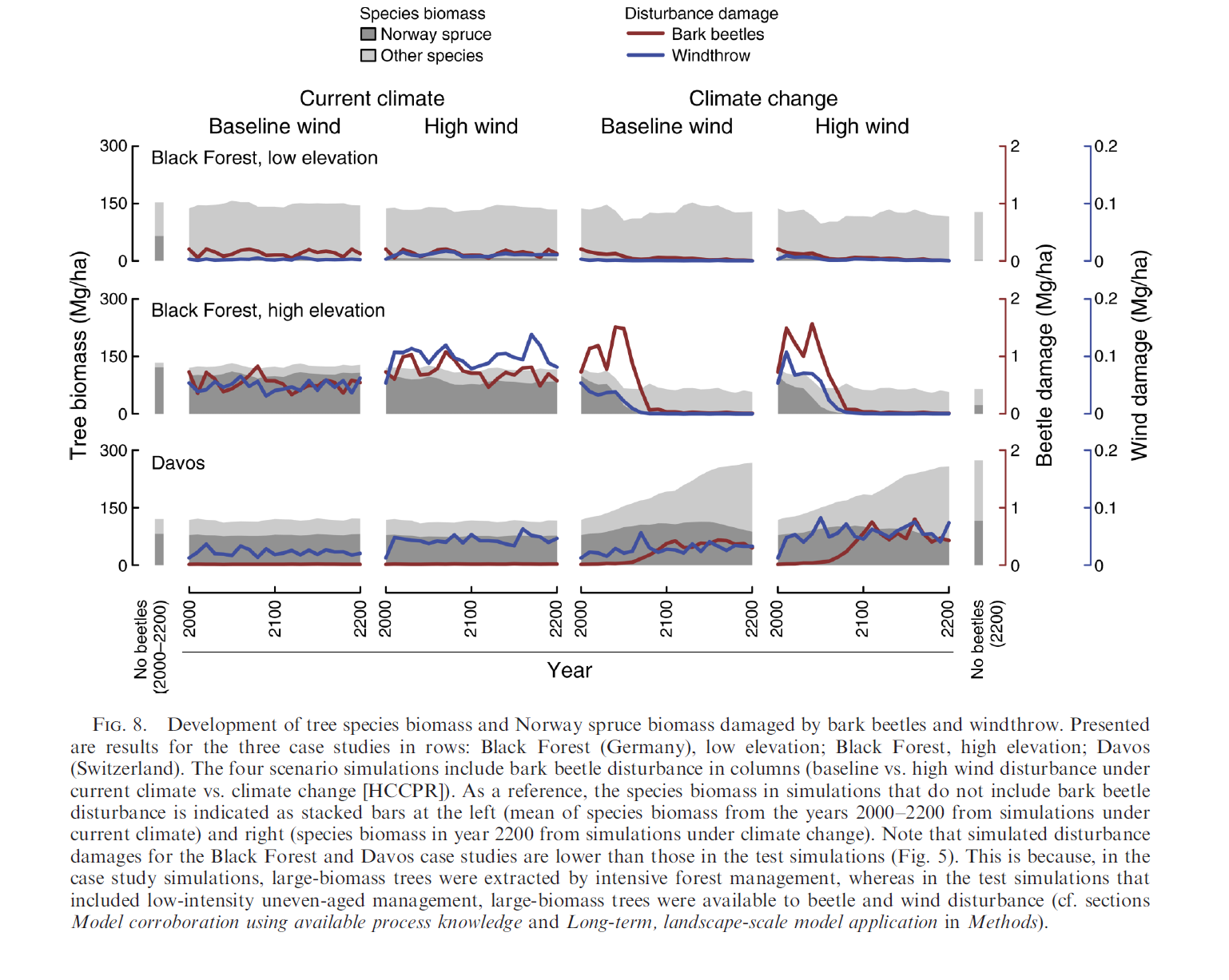 The Mediterranean Basin is the region of Europe most vulnerable to negative climate-change impacts, including forest decline, increased wildfire, and biodiversity loss. Because humans have affected Mediterranean ecosystems for millennia, it is unclear whether the region’s native ecosystems were more resilient to climate change than current ecosystems, and whether they would provide sustainable management options if restored. We simulated vegetation dynamics with LandClim, using present-day climate as well as future climate-change scenarios, in three representative areas that encompass a broad range of Mediterranean conditions and vegetation types. When combined with modeling, paleoecological evidence reveals the potential of native vegetation to re-establish under current and future climate conditions, and provides a template for novel management strategies to maintain forest productivity and biodiversity in a warmer and drier future. 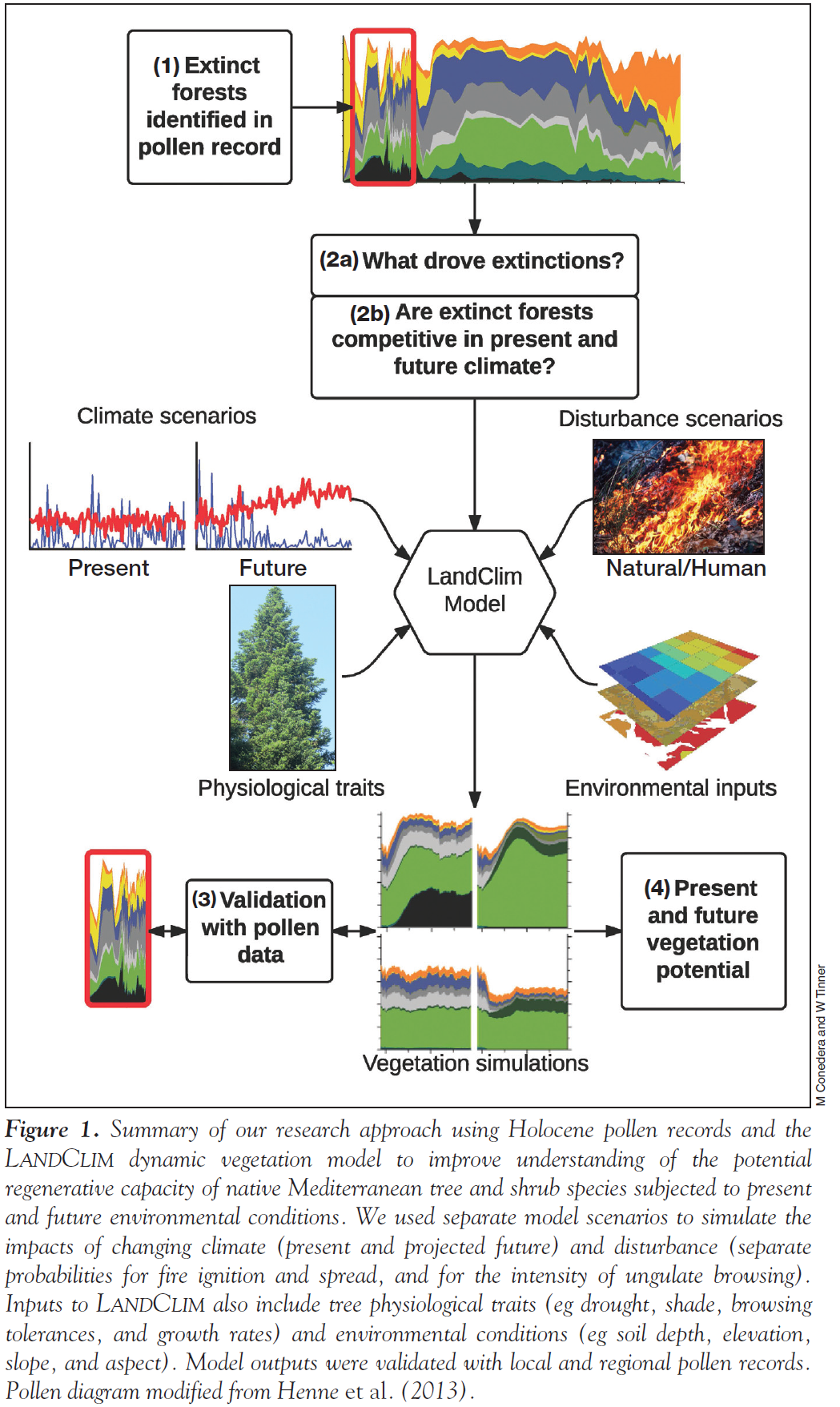 Development of the forest landscape model LandClim, test of its realism compared to vegetation data from the Dischma valley, European Central Alps as well as the Colorado Front Range, USA.

The LandClim source code is maintained in C#.

LandClim is provided as an executable file together with a set of xml-files where all the basic settings of the simulation experiment and model parameters are managed.

BUGMANN, H. (1994). "On the ecology of mountainous forests in a changing climate: a simulation study" Ph.D. Dissertation, ETH Zurich

Your experience on this site will be improved by allowing cookies.